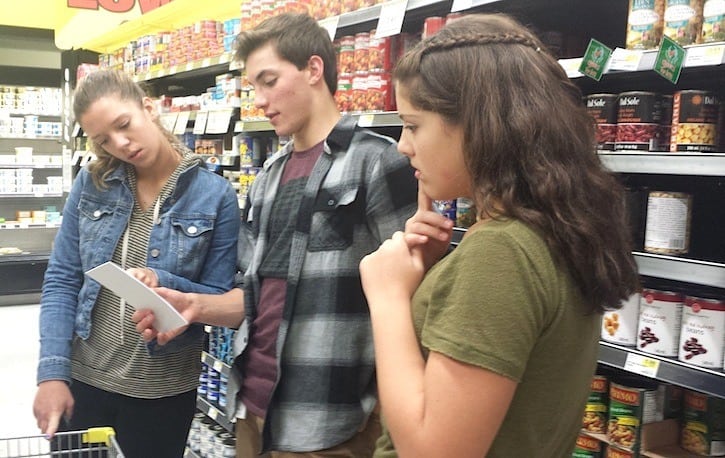 We have been featured in the Langley Times multiple times!

A free food bag program for students-in-need at three Langley schools has lost its main sponsor and the student leaders who created the program are scrambling to replace it.

Each bag has two breakfasts, two lunches, drinks and snacks to tide the students over the weekend and are picked up confidentially at the school, usually in the guidance counsellor’s office.

Each Monday the students in the program return their empty reusable bags and on Friday come back for a full one.

“We started the program back in the summer, knocking on Langley business doors to ask for donations,” said Katrina Schulz, one of the student co-founders of Weekend Fuelbag and a Grade 12 student at R.E. Mountain Secondary School.

Several businesses, including Lee’s Market in Fort Langley, Costco, Safeway, and Cobb’s have made one-time donations, but the key sponsor was Buy-Low Foods in Walnut Grove.

“They (Buy-Low) provided us with gift cards to shop in their store and said to come back when we run out” said Brady Lumsden, another co-founder of the program and a Grade 10 student at Walnut Grove Secondary School.

“They really believed in this program and could see the value.”

But the Buy-Low store is preparing to close.

“They just can’t do it anymore,” said Emma Schulz, the third co-founder of the program and a Grade 8 student at Yorkson Middle School.

“It is just really too bad for the kids in the program that count on this food each week.”

The students are making an appeal to the community for assistance.

If anyone would like to donate, the three schools will take grocery store gift card donations at the office for “Weekend Fuelbag”.

Weekend Fuelbag can also be reached directly on Twitter and Facebook (@weekendfuelbag) or email weekendfuelbag@shaw.ca and donations of non-perishable food or giftcards can be picked up directly.

Thanks to new sponsors, a program that feeds hungry kids will not have to close. Instead, it is expanding to more schools and more students in Langley.

Katrina Schulz, one of the co-founders of the “Weekend Fuelbag” program, said two major sponsors have come on board to adopt five more schools.

“We’d be potentially helping a total of 80 middle and high school students in Langley (up) from the current 16,” said Schulz, a Grade 12 student at R.E. Mountain Secondary School.

One of the new sponsors, the Murrayville IGA ,is going to adopt three schools for the remainder of the school year.

The other is Brookswood alumni Graham Robins at A&A Customs Brokers, who is donating $800 a month to the program for Brookswood and HD Stafford schools.

Robins said he was impressed by the “giving” nature of the students who organized the program, and wanted to ensure it continues.

“I was actually kind of surprised that this was happening (students going hungry)” Robins said.

He is also supporting the program at HD Stafford because that is where his wife, Suzanne  Burgess Robins attended.

The new sponsors will allow the program to expand to cover as many as eight schools.

The program to help hungry students was the idea of Schulz and Brady Lumsden, a Grade 10 student at Walnut Grove Secondary School, with Emma Schulz, a Grade 8 student at Yorkson Middle School.

Weekend Fuelbag has been providing a bag of food each Friday to 16 middle and high school students at R.E. Mountain Secondary, Walnut Grove Secondary and Yorkson Creek Middle School.

Each bag came with two breakfasts, two lunches, drinks and snacks to tide the students over the weekend and were picked up confidentially at the school, usually in the guidance counsellor’s office.

In October, the main sponsor, Buy-Low Foods in Walnut Grove, was preparing to close.

When the students went public with their plight, offers of help began flooding in from businesses and charities.

Among them was the Buy-Low Foods in Brookswood, which was willing to help and interested in expanding the program.

Donations for Weekend Fuelbag can also be accepted online through Langley School District Foundation (www.langleyschooldistrictfoundation.com) but donors must put “For Weekend Fuelbag” in the comments section.

Tax receipts will be issued for donations over $25.